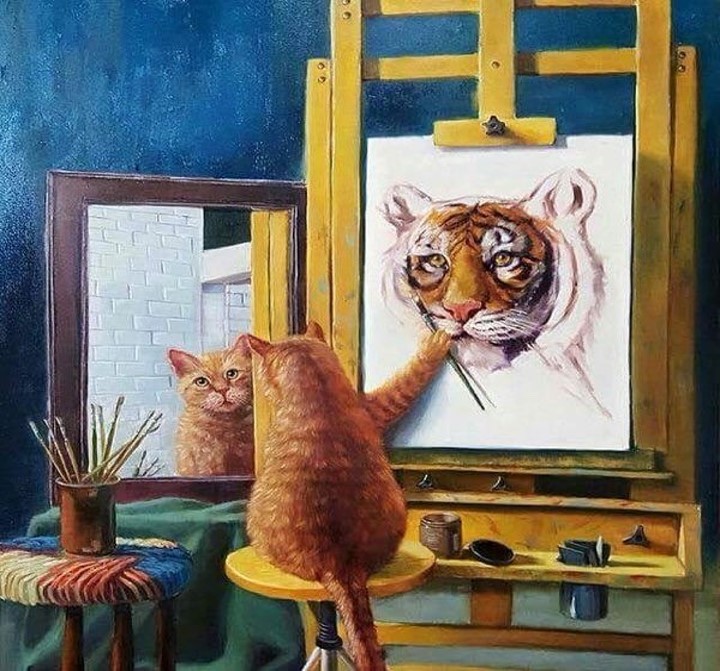 The topic of self-awareness is obviously important for anyone who is seeking to understand themselves and to communicate and act more effectively. So what do we know about the brain based science of self-awareness?

The development of self-awareness

A good way to understand how self-awareness works is to watch how it develops in children. For example, have you ever watched a young child stare at themselves in the mirror? A very young child of around a year old won’t recognize their reflection, and they may try to play with the other baby that they see. But once kids are just a little older, at around 18 to 24 months, they will start to recognize that the person in the mirror is them. This shows that they understand that they have a physical body which is perceived by others in the world.

A famous test of self-awareness in psychology is called the dot test. You put a brightly colored dot sticker on a child’s forehead, and then sit them in front of a mirror. If the child reaches for the mirror, then they possibly don’t understand that the reflection they see is themselves. But if the child reaches for their own forehead to touch or remove the sticker, you can know that the child recognizes themselves in the mirror. This is one of the key developmental stages of acquiring self-awareness.

Awareness of your physical body

Another key aspect of self-awareness is the awareness we have of how our body is positioned. You might think that we work this out visually – for example, that when we catch a ball we look at the ball and then look at our arm, and adjust accordingly. But in fact, that’s not the case. Even with your eyes closed, you can still tell where your limbs are positioned. This is a sense (yes, we have more than five senses!) called proprioception.

There are special receptors in our muscles called muscle spindles which send signals to our brains indicating when a muscle stretches. This allows our brains to calculate the position of our bodies, even when there is no visual information available. Interestingly, this is why it is impossible to tickle yourself. Certain movements on body areas feel ticklish because those movements are unpredictable – but when you are the one moving your fingers over your side, you don’t experience the tickling sensation because your brain already knows how your fingers are moving and is expecting to feel that pattern on your skin.

Awareness of your own mind

There’s a different way to think about self-awareness, and that’s in terms of our awareness of our own minds rather than our bodies. You might have heard of a famous finding called the Dunning-Kruger effect. This is a cognitive bias in which people who are very bad at a task tend to wildly overestimate their ability at that task. If you take a test of skill or knowledge – and it can be practically anything, from skill at driving to mathematical ability – and then ask participants to rate their own performance on the task before you tell them their results, then you might expect participants who are very good at the task to rate themselves highly and people who are bad at the task to rate themselves as low in skill.

The problem is that in order to assess your performance on a test accurately, you have to have knowledge of the subject. In other words, you have to know what you don’t know. There is also the issue that people tend to assume that others are similar to them – so highly competent people rate themselves as just a bit above average because they overestimate the skills of others, while people low in competence rate themselves as above average because they overestimate their own skills.

Dunning-Kruger is often used to make jokes about incompetence, but it also reveals an important aspect of self-awareness called metacognition. This is the ability to think about your own thinking: this means the ability to understand how you learn, to decide which strategy you should use to solve a problem, and to gain insight into your own strengths and weaknesses.

Why self-awareness matters so much

One of the reasons that metacognition is so important is that self-awareness is linked to self-regulation. Self-regulation refers to the ability to manage your emotions in a productive way – for example, the ability to stay calm and not lose your temper when you have to deal with an overbearing colleague. This process requires you to suppress some emotional responses and plan for the future in order to achieve a long term goal – in this case, to get your work project completed and not to get fired.

The interesting part of this test is the long term results. Researchers at Stanford found that children who were able to self-regulate and to wait for the two marshmallows had better outcomes later in life than children who couldn’t. These children who could self-regulate had better educational performance, better physical health, and more successful careers. The ability to regulate your emotions and to prioritize the future over immediate gratification is a key skill for a happy and successful life.

This is just scratching the surface of the research on self-awareness in cognitive psychology, so check back here soon for more about this fascinating topic, or visit www.scottstedtalk.com to learn more. You can also contact Scott at www.discoveryourself.com