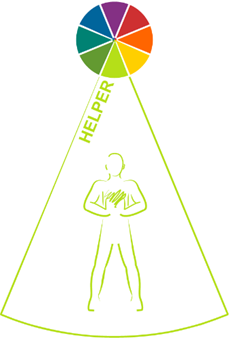 Someone who is a ‘people person’ is known for being warm, sociable, and friendly to a fault. They will go out of their way to lend a helping hand to people they know, people they work for, and occasionally someone they don’t know. Someone who is known as a people person could also be called a Helper, or, as Carl Jung labeled it, the Feeling type personality.

Helpers are sensitive to the needs of others and are always available to lend a hand when others need assistance. At work and in their personal lives they are warm and sociable, always accommodating to others. They are driven by consistency and ambition to succeed with and through others.

Helpers seek to create an atmosphere of positive social relationships with the people around them, at work and home. Helpers are ideal in mediation or counseling situations as they are very steady, consistent, and seek the correct solution for another person’s problem. Helpers are great at giving advice and are often sought out for their honesty.

Helpers are best assisted by coworkers and friends who can give a Helper the same care they are given. Helpers can become overwhelmed by taking care of people around them; everyone, even a Helper, needs a support network. Just like Helpers are sought out for advice and a listening ear, Helpers also need these things from their friends and coworkers.

Helpers value loyalty in their friends and appreciate when others help them out. Unfortunately, when Helpers don’t feel like others have given as much for a job or relationship as they have, grudges can form.

Helpers struggle to say no, which can cause them to be overwhelmed in work and social situations. They often refuse to turn down requests for help that can cause them to be distracted and anxious that they can’t deliver a great solution to every project they have taken on. Criticism should be given in the right way so that a Helper doesn’t see it as a personal attack; keeping criticism objective is very important for Helpers to improve their work lives.

Sometimes, Helpers need help too. As leaders, Helpers need help to assert their authority. When individuals with Helper personalities are in charge of a team, they are often more concerned with everyone getting along than they are with the results. As Helpers are more attentive to the people rather than the project, others may view them as lacking in proactive tendencies. Focusing a meeting on the actual results of a project can help a Helper realize that disagreement or discussion isn’t a bad thing; rather, they should be encouraged.

If you would like further help in identifying yourself or someone you know who may be a helper, schedule me, Scott Schwefel, as your keynote speaker. I will come to your group and address the differences in personalities in a truthful, fun, and easy-to-understand way. Follow me on Facebook, LinkedIn, and Twitter to share my blogs with the color energies you work with!

Motivated for Greatness Coordinating a Great Team
Scroll to top