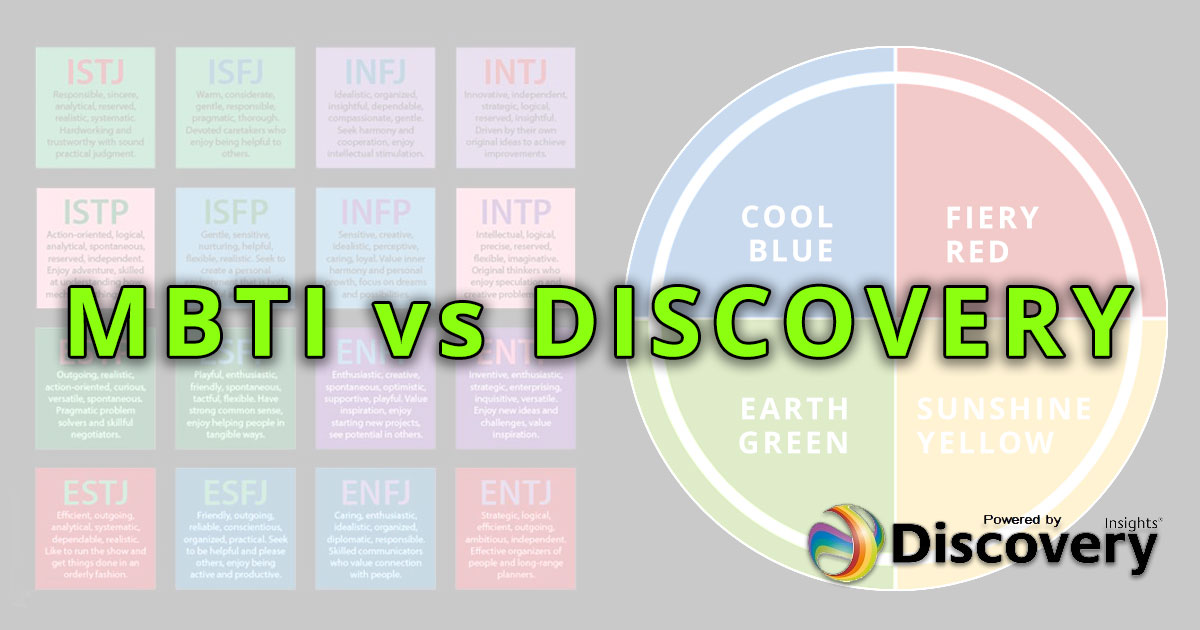 In our last post we compared two kinds of psychometric assessment that are used in business contexts: Discovery and Disc. Today we’re continuing that theme by comparing two more assessments, looking at MBTI vs Discovery. MBTI is one of the most popular forms of personality assessment used by the public, and it is in many ways similar to the Discovery. However, there are key differences between the assessments too. Let’s dive into MBTI vs Discovery and look at how the two compare so that you can decide which is right for your business needs.

Jung: The basis for both MBTI and Discovery

Both the Insights Discovery assessment and the Myers-Briggs Type Indicator assessment (MTBI) are based on the work of psychoanalyst Carl Jung. Jung proposed that there were four key cognitive functions (thinking, feeling, sensation, and intuition), each of which could be presented in an introverted (self-directed) or extraverted (world-directed) form.

From these key cognitive functions, a set of personality types can be defined. The idea is that different people will tend to primarily use one type of cognitive function in their interactions with the world, so therefore you can assess which function people use most often in order to describe their personality. Both the MBTI and Discovery take this approach. It’s important to realize that when completing either of these personality assessments, which are typically done in the form of multiple choice questions, that there are no right or wrong answers in either case. Both assessments are non-judgmental of the worth and value of different personality types.

The MBTI is one of the longest-running popular personality assessments, having been in use for more than 70 years. It uses a questionnaire to break down personality into 16 types, with each type given a four-letter designation. These four letters represent the four type preferences, each of which are dichotomous (i.e. they are opposite to each other on a scale):

Intuition is the use of your own previous knowledge and experience when gathering information from the world, and being future-oriented, while sensing is more reliant on information that is available in the present moment from the senses, making sensors present-oriented.

Thinking and feeling refer to decision-making functions: thinking is the use of a detached, rational approach that requires weighing data to reach a causal and consistent understanding of the world, while feeling is the use of empathy and association to understand how a situation could appear from the inside, aiming to reach a consensus view that meets the needs of everyone involved.

As you can see, there is a lot of information contained in an MTBI type. However, the types can be difficult to understand and to remember due to the abstract nature of the four letter designation. The Insights Discovery tool takes a different approach, even though it is based on the same fundamental principles of Jung. The Discovery tool uses the concept of four colors to describe four different styles of personality (precise cool blue, caring earth green, sociable sunshine yellow, and confident fiery red). Within these four broad color types, personalities are assigned to one of 72 subtypes based on Jung’s cognitive functions. Following Jung’s theories, these types include looking at unconscious or less conscious aspects of cognitive processes – unlike MBTI, which focuses only on conscious processes.

Each of the four color descriptions is based on a combination of Jung’s attitudes (extraversion or introversion) and his rational functions (thinking and feeling). However, instead of being given a letter or a name for each combination, the Discovery tool uses the names of colors to make the concepts easier to grasp. Another advantage of the four color approach, as well as being easier to remember, is that it is easier to compare relationships between different color personalities. For example, it’s much more intuitive and easy to understand how a relationship between a cool blue and a fiery red will go than trying to imagine the relationship between an ESTJ and an INFP.

The color concept also allows for crossover between different color types to match the complexity of human personality. For example, the motivator is a description in Discovery for someone who is a mix between fiery red and sunshine yellow, and the coordinator is a mix between earth green and cool blue. These types can be tracked to Jungian functions too if required (the motivator is a term for extraverted intuition and the coordinator is a term for introverted sensing).

Finally, a key difference between MBTI vs Discovery is that Discovery information is given in a report that is specially tailored to the needs of businesses, such as giving information about how to best manage a particular personality type. The MBTI tends to give brief general information in its profile, while the Discovery profiles are in-depth and specifically relevant to the world of work.

Our next post will expand on MBTI vs Discovery and discuss another comparison of personality assessments – looking at Insights Discovery and Strengthsfinder systems.