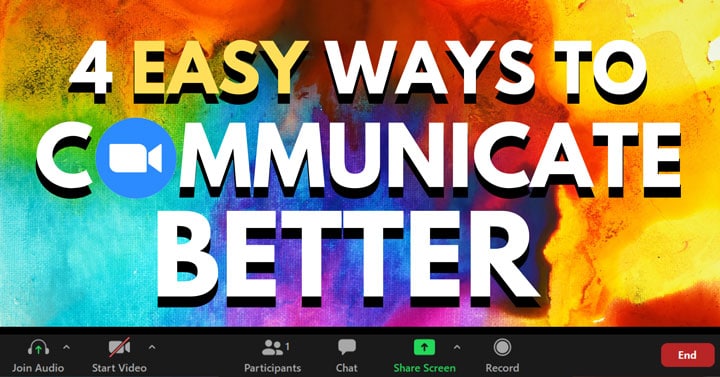 Not even a global pandemic can stop us from communicating. While video calls aren’t optimal, there are things we can do to reduce “Zoom fatigue” and feel more connected to the people on our call. Learn these 4 ways to communicate better on zoom and ensure success.

When we’re effectively communicating with someone in person, there is a level of self-awareness involved in understanding how you’re showing up and how the person would like you to engage with them. This self-awareness is taken to an unhelpful extreme when there’s a video of yourself staring back at you. This would be like staring into a mirror when talking to someone in person. Awkward and distracting, to say the least.

The good news is that on Zoom, you can hide yourself without turning off your camera. Others can see you, but you won’t be staring at yourself—the closest you’ll get to the experience of talking in person. If you’re in Gallery mode, all you have to do is right-click your video to display the menu and choose “Hide Self View.”

It might be easy to say, “Well I just don’t/won’t look at myself,” but it is nearly impossible to not pay attention to your every blink, wiggle, and stray hair. To really be present, you’re better off hiding your video and giving your full attention to others.

2. Optimize your onscreen appearance as well as others’.

Optimizing your appearance is about more than just looking good, it’s about the ability to read subtle facial cues, which are hugely important to effective communication. Human beings are extremely sensitive to one another’s facial expressions, and expressions of emotion are a detailed display of muscle contractions, particularly around the eyes and mouth, often subconsciously perceived, and essential to our understanding of one another.

It’s important to give everyone their best chance at picking up these clues that underpin any dialogue by placing yourself in a well-lit space, placing your laptop or digital device on a firm surface, and allowing your face to take up no more or less of one-third of the screen. These conditions most closely mimic an in-person interaction where you can see clearly the nuanced projection of thought and emotion.

If you’re having trouble seeing someone’s face, if their camera is shaking and swaying, or if their face is too far or too close to the camera, let them know. Facilitate a conversation that will allow you to communicate more easily and effectively on this two way street.

3. Make sure you have a strong internet connection.

While this tip seems to go without saying, having a poor internet connection on a video call does more than alter the quality of transmission, it alters the emotional value of the interaction. We cannot be our most effective communicator when there’s an underlying feeling of frustration or disconnect.

Psychologists, neuroscientists, and computer scientists say that distortions and delays in video communication can make you feel anxious and isolated. The brain is in a state of dissonance trying to make sense of the fragmented information it’s receiving. This cerebral confusion translates to emotional discomfort. You may not even be aware that the symptoms of a weaker internet connection are causing stress and fatigue.

Communicating through a screen is hard enough without the extra burden of audio or video going in and out, lagging, or being distorted in any way. Again, the most effective communication happens when we can clearly see and hear the person with whom we’re engaging so that we can better lean into their style. Tip: If your wi-fi isn’t very strong, try hard-wiring into your modem or router.

4. Lean into the others’ style.

This is without a doubt the most important tip for any effective communication, on Zoom or in person.

The best communication happens when we lean into the style of the person to whom we’re talking. The good news about this is we do it naturally. Without realizing it, all of us engage in mimicry when we encounter another person. By mimicking, we are essentially saying “I behave like you do, I fit in here, and we trust each other.” We can mimic someone’s facial expression and body language, but we can also mimic their verbal style of communication.

Pay attention to the tone, pace, and message of the people on your calls, and lean into it. This is where the Insights Discovery model comes into play. To learn about Insights Discovery, click here. For now, here’s a quick cheat sheet:

If they smile a lot… smile more.

If they speak quickly… speed up.

If they speak slowly… slow down.

Don’t treat people the way you want to be treated. Treat them the way they want to be treated. You don’t have to fully mimic their behavior and style, but you must be aware of it and lean into it, even just five percent, to build stronger rapport and communicate more effectively.

The days of zoom are far from over. It’s in our best interest to learn how best to communicate with others through a screen. In the end, you may find a lot of what you’ve learned applies to more than just  Zoom meetings.

Do you have any great communication tips to share? Let me know at scott@discoveryourself.com 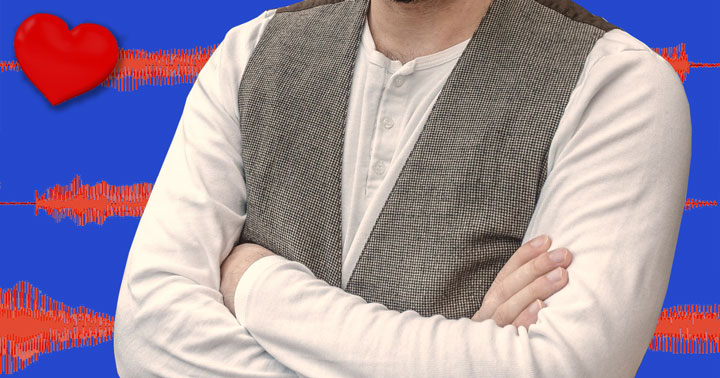 You may not have heard of Albert Mehrabian, an Armenian-Iranian professor of psychology at UCLA, but you’ve almost certainly heard of his work. He studied human communication, and he performed experiments in the 1960s on the relative importance of words, tone, and physiology in verbal communication.

What is the most important part of speech as communication? It seems obvious that the answers would be the words that the communicator speaks, as they convey information most consistently. But according to Mehrabian, tone and physiology are even more important than words. Put another way: body language speaks volumes louder than words ever can!

Mehrabian was interested in how humans communicate, and whether verbal or non-verbal cues play a more vital role in conveying messages to one another. The idea behind the experiments he came up with was to judge the relative impact of three different factors on verbal communication:

Mehrabian aimed to compare the relative importance of verbal and non-verbal communication in face-to-face conversations. In the first experiment he ran, participants observed a person saying a single word and then judged whether that word was meant in a positive or negative way. The experimenters varied the communication so that sometimes both the word and the tone was positive (e.g. the word “dear” delivered with a smile), sometimes both were negative, and sometimes the word and tone were incongruent (i.e. the word was positive, but the delivery was negative). From the judgement of the participants over whether the communication was overall positive or negative, Mehrabian worked out how much of the judgement was due to the tone versus the word.

The problem with Mehrabian’s work is that it is frequently over-interpreted and used to make claims that are not actually supported. You’ll hear people claim that “body language makes up 55% of all communication” or that “non-verbal communication is more important than verbal communication.” In fact, this isn’t the case for several reasons.

First, remember that the experiments were performed with the participants listening to single, isolated words without context, which is not at all how humans typically experience communication. Secondly, the physiology factors that were consider were facial expressions, not body language as is commonly claimed. Most importantly, the experimental findings applied only to incongruent situations. This means that when physiological cues and verbal cues do not match, people disproportionately base their judgements on non-verbal rather than verbal communication. The same thing is not necessarily true in other situations.

A final key factor that often goes completely overlooked is that these experiments equated communication to each speaker’s feelings and attitudes. In other words, Mehrabian’s speakers weren’t talking about facts or objective information, but instead their own subjective likes and dislikes.

Think of it this way: if you were at a party and you asked someone if they were having a good time, and they said yes while using a flat tone of voice and not making eye contact, then you’d naturally assume that they were not really having a good time. But if someone tried to tell you that the Earth was flat, it wouldn’t matter how upbeat they sounded or how excited they were, you still wouldn’t believe them. That’s because the person at the party was talking about their feelings, where non-verbal cues are important for your judgements, but the flat earth enthusiast was talking about facts, where you are more focused on the content of their speech.

Of course, none of this is meant to refute that body language and other non-verbal cues are important in communication. It’s just that Mehrabian’s studies don’t really show what they are often claimed to show. But there have been many other studies over the years that have looked at verbal and non-verbal communication.

A notable example by Argyle and colleagues from 1970 used video tapes to show participants communicators who were either dominant or submissive, and it found that non-verbal cues and especially body posture contributed 4.3 times more to their judgements than did verbal cues.

On the other hand, a 1992 study by Hsee and colleagues analyzed how clinicians make judgements about the emotional states of their clients. They found that participants made judgements about another person’s emotional state based more on that person’s self-report and facial expressions than on their tone of voice. This could be because clinicians are trained to listen more than most people and are very attentive to subtle cues like facial expressions.

So what does all of this mean in practice? Essentially, effective communication requires a combination of words, tone, and physiology that are all in harmony. When you share information, especially if you are talking about your personal feelings, you needn’t be stiff and formal. In fact, you’ll communicate more clearly if you allow your body posture and your tone of voice to convey the same meaning as your words.

Next week we’re going to talk about the reverse of communicating effective – how to listen effectively. Come back soon for that!